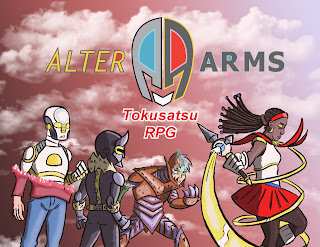 I'm currently working to finalize the rules for peer review from volunteers, and hope to get this done within the next month.

My next major playtest is going to be at Metatopia in Morristown, NJ, 11/1-11/4, where I'll be showing off the updated version to fellow game designers.


Mechanics-wise, a major change that has occured with the game is in regards to the Gimmicks (formally Trappings. This was changed to be more thematically appropriate as tokusatsu characters usually have gimmicks that act as their powers and forms). Before, they were used as a simple framing device for the action a character can take, bestowing a small numerical bonus to skill checks, but they've changed to become a much more versatile aspect of character expression.

Now, Gimmicks are the "theming" of a character; like if they have fire powers, are psychic, have tentacles, or super-speed; they determine what unique actions a character can take.

They are expressed as simple words or phrases that describe what the different forms a character can take. They've been used by players to neat, creative effects in playtests, allowing them to interact with the game world in ways I previously hadn't expected, but certainly hoped for.

By working with the GM, players work out how the Gimmick is expressed, with the goal being to give the player unique verbs they can use to solve their problems. On the GM side of things, I can't give them too much power, but should allow them to perform unique actions that could add wrinkles to the story.

I learned about how the Gimmicks can be used to great effect during a recent playtest. One pregenerated character for playtests has the gimmick of "Well-Equipped." This was originally worked out to suggest the character might have useful gadgets to solve problems. Nothing too extreme, just a set of lock-picks to open a locked door, or a knife to cut a rope. Mechanically, this would allow the character to get small numerical bonuses for actions they perform. The reasoning being that characters without these Gimmicks could still perform the same actions, but not get that minor bonus and have slightly different outcomes.

In this playtest, the characters had to infiltrate a base that was guarded by a number of androids networked together. The player with the "Well-Equipped" character suggested that they could use the Gimmick to have a device to hack into the network and gain control of the androids. I allowed this to happen, but only by establishing that:

A) The character needed to be at an access terminal to do so (They incapacitated a single android to hack into the network that way)
B) Different actions could occur as a result of the hacking attempt, depending on how the value of the skill check being attempted compared to the values I came up with on the fly.

If the attempt failed, the base would be aware of the player character's presence and send backup to attack them. If they achieved a move at a reasonable value for the action they were performing, they could take control of this individual android they were hacking into. There were a series of progressively more difficult but beneficial values they could attain)

The player only managed to hack the individual unit, and I allowed them to take on "Android" as a Gimmick that would only last for this playtest. They proceeded to use this new Gimmick to sneak further onto the base in plain sight, performing SOUL skill checks against suspicious parties, explaining that their android escort made it look like they belonged at the location.

They managed to get to their destination this way, and further use the "Android" Gimmick in combat against opponents.

I am really excited to see how this mechanic is used by players, and hope to get more feedback soon.