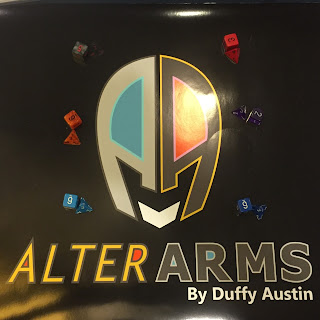 I had the opportunity to playtest Alter Arms at the Music and Gaming Festival (MAGFest) earlier this year, and wanted to post about how the experience went.

After each session, I recorded a freeform survey of the group to gather their opinions. 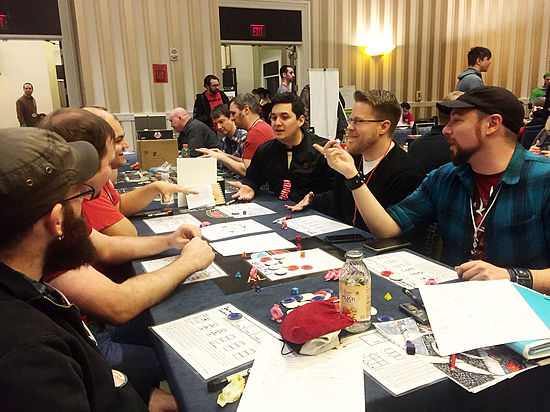 Almost all of the feedback was positive. Players said they enjoyed how the system enabled them to create their characters how they saw fit, which I had intended in my efforts to emulate the source material. I designed the three vector stats to allow players broad avenues to describe how their actions were success or failures, depending on the result of the dice rolls.

Dice mechanics were also complimented, with players saying they liked how multiplication felt as a way of determining if something was successful because of how high the numbers got and the degrees of success they allowed. Players also liked how transformation gave them access to new dice, and the tactile way it portrayed power.

Players still pointed out, though, that the freedom of creativity was due in part to what the game master allowed. When this goes to print, I would need to convey that need for encouraging and accepting creativity from participants.

Another wrinkle to this is that such creativity could hamper feelings of advancement in the long run. Like having a character do something too crazy from a success when their character is still low level, with leave them with few places to go once they reach higher forms. 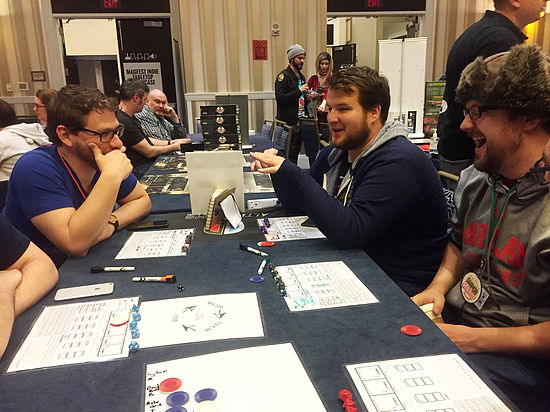 The major criticisms were that the module was a bit too easy, which I mention was intended to give players as easy a glimpse of the game as possible in the time that they were able to set aside to play. It does make me want to test out the system more at a higher difficulty, particularly in such a way that would require players to use all of the abilities available to them. During gameplay, there were few instances of players using their archetypes to lower theirs or any other characters’ drama. I want to put them into situations where they might have to rely on them. Those two instances where a player was defeated could have been avoided had any of the characters used their archetypes to heal them.


SPEEDING UP GETTING INTO THE GAME

Something I observed was that the character creation portion of the sessions took up more time than I would have preferred. This was due to the number of options that were presented to the players to begin with. When I tested the game at Metatopia last year, the other designers that tried it out called it ‘analysis paralysis.’ This, coupled with the time it took for players to come up with their character’s name and premise, leads me to believe that in the future I should fully pre-generate characters in order to speed things along

I could also create cheat sheets that would allow players to get a quick understanding of the systems so we could jump right into the game, and allow them to ask questions if things are confusing.

What do you think?