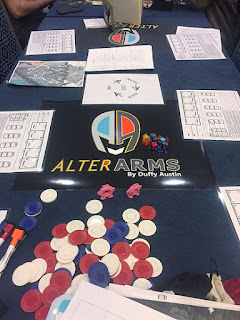 My name is Duffy Austin, and this is the production blog for my tokusatsu-themed tabletop role playing game, Alter Arms.

Like a lot of kids who grew up in the 90s, I was blown away by the Power Rangers phenomena. At the time, it was astonishing to see such care and dedication being put into creating a live action television show about people in brightly colored costumes fighting crazy monsters with lasers and giant robots. Looking back, a lot of the series hasn’t aged well, but the charm of it, and of all special-effects driven shows like it, remains. No matter how silly the special effects, or plots, or lines seemed, the fact that the creative forces behind them sincerely presented them made them real and important.

It wasn’t until I was an adult that I discovered the original Super Sentai series that provided the footage that was used to make a lot of Power Rangers. The franchise, and the entire genre of tokusatsu, had been around since the 1950s. The name translates to “special filming,” and is used to refer to live-action shows with a heavy special effects element. The early giant monster movies of the 1950s paved the way in properties like Godzilla and Prince of Space and led into television productions like the aforementioned Super Sentai and Kamen Rider.

The most popular subgenre of tokusatsu is Henshin Heroes (Henshin means “transform” in Japanese). In this genre, characters often transform into more powerful forms in order to save the day, represented by increasingly more stylized costumes as they grew in power. In the production of shows, it was a way to switch out actors for stuntmen without the audience noticing, since the more powerful forms’ costumes often included masks. An unexpected side effect, I believe, is that having heroes don new forms when fighting evil allows audiences to better project themselves onto them.

Heroes like Kamen Rider, Super Sentai, Kikaider, the descendants Sailor Moon, Pretty Cure, and Garo, and even unrelated ones like Iron Man and Spider-Man – I think all owe some part of their popularity to the fact that, by disguising their identity when in action, they could be anyone. So everyone can relate to them, in some way.

Everyone wants, in some way, to be better than they already are; to go beyond themselves and start fresh. I think that’s one of the reasons we like playing role playing games, and why I think tokusatsu makes for a great theme for an RPG.

Alter Arms takes place in modern day, with people possessing the ability to take on different forms – referred to as Alters – first appearing within the last 10 years. At first, they only appeared in instances of magical girls fighting supernatural evil, masked heroes combating evil organizations, and robots gaining sentience and rebelling against their nefarious creators.

These were all isolated incidents; things that could be written off as oddities. It wasn’t until the most recent event, when the international combat force, Spectroopers, fought against alien invaders, Space Demon Army Nabas, for the fate of the planet, that it became apparent that Alters were going to be an ongoing issue. The technology that allowed the Spectroopers to transform and gave them their powers was leaked to the public, quickly replicated and mass-produced. Suddenly Arms – the term used to refer to the means by which Alters transform – became a very real threat.

And it wasn’t just the ones that had their origins with the Spectroopers, Arms of all origins started coming out of the woodwork. The evil organizations that were defeated years ago started a black market for the Arms they had sitting in storage. Magic artifacts were uncovered that bestowed fantastic abilities on those who used them. Robots who were left leaderless after their creator was defeated are throwing off their human disguises to reveal their true natures to the world. On top of all this, there are refugees on Earth made of the remnants of the Space Demon Army Nabas who were hiding in human form.

Alter Arms is a role playing game with a game master who devises the scenario that a group of players, taking the role of Alters, must play through to come to a resolution. The central mechanic of Alter Arms revolves around balancing your character’s Drama, basically the damage a character takes, to use special abilities, and take on more powerful forms to respond to the situation.

As characters transform, they take Drama and gain access to larger dice for performing actions, and higher defenses. Over the course of a game session, players can even level up to raise a stat, or gain a new form with new powers.

Players have three stats, called Vectors: Might, Brains, and Soul. Might is tied to physical actions, Brains to mental tasks, and Soul to social interaction. They are very broad in the scope of what they cover, with the intention being that players can use them to creatively frame their actions and describe how they succeeded. They are all viable options during combat, where players can frame their attacks against an opponent around their physicality, intelligence, or willpower. As such, each stat has its own defensive value that must be met or surpassed in order for a move against a target to be successful. Vectors have rankings of 1-3. Each player begins by raising a single Vector to rank 2.

Along with Vectors are Traits: Bold, Clever and Stylish. Each is tied to a Vector. Bold to Might, Clever to Brains and Stylish to Soul. Players choose one trait for their character and cannot change this for the rest of the game. The Trait can be activated when a player makes a move with that Vector, or is attacked via that Vector, in order to raise that Vector by two rankings for that single instance, at the cost of 1 Drama. So, a move made with a Vector ranking of 1 could be raised to 3, or a ranking of 2 could be raised to a 4.

Players are able to determine if an action is successful by rolling the dice associated with their current form (d4 being the lowest, with each subsequent form being 2 higher to a maximum of d12) and multiplying the result by what the Vector they are testing is ranked at.

For example: If I was un-transformed – in my base form – making a Might roll to see if I could successfully move a bolder that was in my way, I would roll the dice for my current form (d4). I got a 4. I multiply this by what my Might is ranked at (2) for a total result of 8. The game master says if this beats the challenge for the task. If this was a Might move against an opponent - say, a punch - it would be successful if the target’s Might defense was 8 or lower.

Players take on a type and a power associated with it for all of their forms above their base form. Different types have unique powers, but more importantly, Edges over one another. It’s a rock-paper-scissors type relationship where if an attacking type has an Edge over a defending type, they roll their dice twice and take the higher number.

Lastly, in order to manage Drama, characters have archetypes that give them moves they can perform on their turns to lower their own or an ally’s Drama. Thematically, they are based on character archetypes found in the game’s inspiration, representing the characters relationships influencing their ability to continue to fight and grow stronger. Archetypes are designed to be more effective against allies than when someone just uses them on themselves (basically, it’s easier to heal someone else or have someone heal you than just heal yourself). This is to encourage teamwork. This ties in with the theme, because when a character uses their Archetype, they express themselves in a way associated with that type of person in a group dynamic. Only by staying in-character can characters heal.

Players advance their characters and level up by either earning experience from performing actions in the environment, or by lowering their Drama once they transform via their archetypes.

WHAT’S MY GOAL FOR MAKING THIS GAME?

I want to make Alter Arms because I want to play a system that allows players to have as much creativity as possible when making characters they want to play as, and have the option to blatantly change those characters as a means of showing their character development. I’m a big fan of this genre, and I want to give other fans a game system they can use to tell their own stories!

November 12, 2018
During the first week of November, I was lucky enough to attend Metatopia , a gathering of tabletop gaming professionals from around the country and beyond, who come together to talk about the industry and gather feedback on their games. I want to give a brief overview of how my games were received, and what I thought of the games I played. MY GAMES Alter Arms is a tabletop roleplaying game (RPG) that I am designing themed around Japanese super heroes . Players are able to take on different forms with a variety of powers in order to solve problems and defeat enemies. It got the most exposure at the convention, with one hi-test (where only other developers played with the intention of dissecting mechanics) and one lo-test (where casual players and other developers can try out games). Both went well, with the hi-test giving me feedback on how mechanics can be abused and some of the character Powers need clarification in their rules.  One mechanic that was noticed to have a l
1 comment
Read more